Kokeritz thought that the name was identical to Vattygcroft mentioned in 1440. This may have related to the farm rather than the wood.

Fattingpark was originally part of Wootton Common which provided the grazing to the eight inhabitants of Wootton manor. Fattingpark lay within the old parish of Arreton and remains part of the medieval boundary which can still be seen as a cart track with a low bank on the east running from the defunct railway line south, dividing the much younger Belmont copse. At the southern edge of Belmont copse the boundary can still be found as a much broader bank with part of a ditch bordered by a footpath running west.

Wootton Common was bounded on the west by Staplers Heath and Bleak Heath, to the north by a bare hill. Mount Misery stood on the northern flank, superseded by Belmont Farm built in 1875-6. There is a reference in the White Popham papers of a John Wallis in 1535 remembering the enclosure of some 100 acres called Fattingpark in derision, but in the Royal Grand survey of 1559-60, updated by Cliff Webster, part of Wootton Common was enclosed and planted by Dame Alice Lisle. Or was it? The date is not in contention but the name of the planter may be. Dame Alice was the wife of the regicide Sir John Lisle who had been appointed one of the Commissioners at the trials of King Charles 1st although Lisle did not sign the death warrant. Under Cromwell Sir John became president of the High Court of Justice, Member of Cromwell's House of Lords and under Richard Cromwell, Commissioner of the Admiralty. Two months after his appointment in 1660 Sir John fled for Switzerland having been omitted from the Act of Oblivion. All his estates were confiscated and Wootton Manor was awarded to James, Duke of York. He reserved part of the manor, containing five hearths, for himself and the existing tenant; James Fitchett refused to pay Hearth Tax on the Duke's portion.

Dame Alice in the meantime had fled to her estate of Moyles Court, Ellingham, Hampshire, which she had with her sister, Elizabeth Tipping, inherited from their father. Elizabeth relinquished her portion to the Lisles in 1658. Some of the Lisle lands were awarded to the younger brother of Sir John Lisle. William Lisle had been an ardent Royalist, had tried to engineer one of the escapes of King Charles 1st when he was imprisoned at Carisbrooke and had subsequently fled to the Continent to share exile with Prince Charles. In recognition of this service at the restoration William and his wife Mary were awarded, it seems, the Lisle manors of Holt Bradford (Wiltshire), Crook Easton (Hampshire) and Appleford on the Isle of Wight. William was also made Recorder of Newport in 1663 and knighted in 1665 but died later that year of a malignant fever caught at Newport. He left his wife Mary carrying a posthumous son, Edward. Before William died possibly in 1664, the Duke of York appears to have granted Wootton Manor to William and Mary Lisle. Certainly at this time either both or Mary were administering the estate so, could it have been Mary or William Lisle who had enclosed and planted Fattingpark?

In 1670 Dame Alice was to sue the Duke of York. Her sister-in-law Dame Mary Lisle (my Lady Lisle) and various others, on behalf of her son John for the capital messuage of Wootton, Curlews Close, Stile Close Coppice, Barnes Coppice, Quarrels Coppice, (enclosed and planted by Sir John Lisle), and Fattingpark Coppice. Does this indicate that somehow in her exile she was able to enclose part of the Common and plant when she apparently had no jurisdiction over the estate? However, Dame Alice was unsuccessful at that time. At the hearing of 1670 a David Saunders of Binstead gave evidence that he had known the capital messuage of Wootton some 40 years and stated that he had also known Stile House Coppice, Curlews Coppice, Barnes Coppice, Quarrels Coppice and Fattingpark. The word coppice is not used to describe Fattingpark.

Dame Alice was to sue again in 1674 and it seems possible that she may have won her case this time although the reports are vague and somewhat ambiguous. This time she sued for Wootton Manor, Curlews Close, Stile Close Coppice, Barnes Coppice, Quarrels Coppice, Fattingpark Coppice and Chillerton Farm. Percy Stone claimed that John Lisle was holding the estate by 1678 as his guardian John Clarke had recovered it. Yet in 1688 Dame Mary Lisle was to award Wootton, Briddlesford, Chillerton, Appleford, Crux Easton and Holt Bradford with the advowson of Wootton, with 3000 Pounds to her son Edward on his marriage to Mary Phillips. 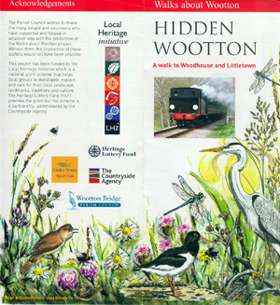